Another week, another hornet’s nest of ranked opponents for No. 16 IU women’s swimming and diving.

IU head coach Ray Looze’s team comes off an upset to No. 12 University of Louisville while overachieving in a narrow loss to No. 5 University of Texas.

Expectations are again stacked against the Hoosier swimmers as they journey Thursday to Knoxville, Tennessee, for a three-day invitational. Lying in wait are No. 2 University of Tennessee and No. 4 University of Virginia.

“They’re both ranked quite a bit higher than us, so we just need to get ready for what’s coming in NCAAs,” Looze said.

Knoxville should provide an accurate preview of the top-tier competition IU will face come March. Headlining the Volunteers is senior Erika Brown, who has been a one-woman wrecking crew in 2019. Brown’s personal best of 48.17 in the 100-yard freestyle is the second-fastest in the country. She also resides in the top 10 for the 100-yard backstroke and butterfly.

For Virginia, junior Paige Madden is a powerhouse in mid-distance freestyle races. Her time of 4:38.67 in the 400 leads the nation. However, the biggest story out of Charlottesville, Virginia, has been freshman Kate Douglass, who is ranked third or higher in four different events.

Brown, Madden and Douglass will lend a definitive edge for their schools in the butterfly, an area in which IU has struggled to separate from its opposition. The freestyle and breaststroke are a different story.

In the breaststroke, IU sophomore Noelle Peplowski and freshman Emily Weiss form a two-headed monster that has swept the 100 twice this season.

Although IU is projected to fall short on the scoresheet, the breadth of experience for its athletes available in Knoxville may prove invaluable down the stretch.

“I think if we just keep doing what we’re doing, that will be great,” Looze said.

Meanwhile, head diving coach Drew Johansen will man the helm in Indianapolis for the House of Champions Invitational on Friday. The three-day meet will feature talent spanning across the Midwest, from the Big Ten to the Horizon League.

The Hoosiers have yet to meet the stratospheric standards of years past set by their former star and current Olympian Jessica Parratto, but there is ample potential for growth on the diving board.

IU freshman Zain Smith has earned NCAA Zone C qualifications in both the one and three-meter dives this year. Joining her in the one-meter is sophomore Kayla Luarde, who carries experience from last 2018’s Big Ten Championships.

When Looze and Johansen’s cohorts reunite after the coming weekend, they will have been exposed to yet another slew of daunting competitors. For a young team in a young season, this weekend is a chance for the Hoosiers to prove they belong on the country’s biggest stage. 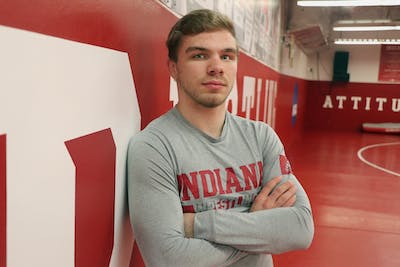 Brock Hudkins was the highest ranked Hoosier at No. 6.