Iris Rosa has seen the growth of the African American Dance Company.

Rosa graduated from IU with a master of science in dance in 1974, and immediately afterward approached Herman Hudson, founder of the then Department of Afro-American Studies, about the possibility of taking on the director role in the new ensemble.

She has been teaching the class and leading the group from the year it was  established.

“We do have all types of students in the ensembles ­— the dance company is ethnically diverse — but our focus still is the lived experiences of the black diaspora in the U.S. and abroad,” Rosa said. “We’ve been able to exist and be part of that fabric of Indiana University, and I think that’s very  commendable.”

Rosa will retire this May from her positions as director of undergraduate studies for the Department of African American & African Diaspora Studies and the African American Dance Company. The company’s final spring show with Rosa as director will take place starting at 8 p.m. Saturday at the Buskirk-Chumley Theater.

Rosa said the University has physically changed in a variety of ways during her more than 40 years on campus, including an influx of more students, but the importance of African American and African diaspora studies has been a consistent  presence.

“Dr. Herman Hudson was the first chairperson of the department and from then on it’s been existing for practically 50 years now,” Rosa said. “That, I think, is a really big accomplishment, that black studies has been part of the fabric of Indiana University for that long.”

As director of both the undergraduate studies department and the company, Rosa said she works out of two offices and wears two different hats, though there are intersections between responsibilities including a good deal of maneuvering between  students and staff.

“When you’re in the artistic space —which is the institute, I teach there and choreograph and rehearse there, prepare everything for concerts and other types of events and activities — you have to put that creative hat on,” she said. “I wear the other hat in the department and it’s another way of maneuvering the academic responsibilities in my office in Ballantine. It’s really a balance I need to keep.”

Hannah Crane, communications director for the institute and former student of Rosa’s, said the company has flourished in no small part because of the director’s drive and dedication, and she and many others working with Rosa still have not come to terms with the idea that she is leaving.

“She’ll be heavily missed for many reasons, for me personally she truly is like a mother,” Crane said. “I consider her part of my family, that’s what’s really so beautiful about African American Dance Company in particular. It is a family and she’s the reason for that.”

In December 2016, the African American Dance Company traveled to Beijing to participate in a dance-driven cultural exchange. The previous year, the group attended a conference in Jamaica.

“It’s only been in the last couple of years the dance company has been able to expand beyond borders, and professor Rosa is the reason for that,” Crane said. “It’s truly been an honor for me to be a part of that evolution and see her legacy, her dance company, grow beyond what we thought it would be. She always knew there was that potential.”

Rosa said the highlight of teaching for her has been when she receives word from alumni about the ways their lives have changed during their time in the company.

Just recently, she received an email from a former student who is now a practicing lawyer and still thinks about her time in the company.

“Whatever they were going through in their college years, the dance company was a space where they could express themselves — through movement, through conversation — that really warms my heart,” Rosa said. “You never know how you’re affecting students until they articulate it to you so to see that growth is incredible.”

Respect for the alumni is one thing Rosa said she hopes her successor in the dance company role takes into consideration.

Though she will not be working through the University after this semester, Rosa said she will continue to dance throughout the community and spread her passion for celebrating arts in African American and African diaspora  communities.

Crane said the legacy Rosa leaves at IU exists not just in the dance company and all of the accolades Rosa has received as a  dancer, but in the impression she has been able to leave with students.

Joining the African American Dance Company during her junior year changed Crane’s life and influenced her choice in career. She said she looks forward to seeing the group grow and flourish and for people to grow more aware of all that the dance company and the institute have to offer.

“I met professor Rosa halfway through my college career, but that transformed the course of my future and my worldview and how I interact with people,” she said. “When we say legacy, yes there’s the tangible dance company, but the legacy is what she’s instilled in her students that continues all throughout the country and around the world.” 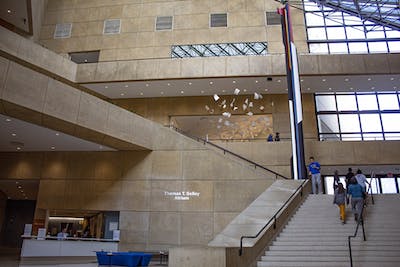