Activists want to defund police departments. What could that look like in Bloomington?

With racism and police brutality coming to the forefront of public attention across the community and nation, many are condemning police departments and the justice system, arguing they perpetuate systemic racism.

The movement to defund the police has become a central component of many activists’ fight, but some observers aren’t sure what that means, especially at a local level. We took a closer look at what defunding the police might actually mean in practice and at the Bloomington Police Department and Indiana University Police Department to help understand how our city fits, and doesn’t fit, into the national conversation.

Recently, protesters across the nation have demanded the defunding of police departments, or the reallocation of money away from the police and into social services. Activists argue a budget prioritizing social services and meeting people’s basic needs could lead to a decrease in overall crime rates.

The idea is to shrink a police department by reducing the number of issues police are responding to and provide non-carceral solutions to problems such as homelessness and drug addiction. Some activists see this as a step toward eventually abolishing the police. Both defunding and abolition would have to happen in stages to help ensure a safe transition away from policing.

She and others have advocated for the creation of a non-911 number that could be called for things like mental health or drug-related emergencies to avoid unnecessary and escalatory police presence. In the absence of a non-911 number, BLM B-Town is working on a campaign called Make the Right Call, which will provide alternative phone numbers for those who would like to avoid calling the police.

BPD Chief Mike Diekhoff explained that even if a non-911 number were created and funds were reallocated, people would still call the police for things they should call the non-911 number for.

“Other organizations are more than capable of creating their own units, but nobody has done that yet. We stepped up because we saw a need to do that,” he said.

Donyel Byrd, a Bloomington social worker, mentioned the same issue with getting people to call a non-911 number. She suggested training 911 dispatchers in alternative crisis response so police are not sent out to calls that don’t require a police presence. This would include situations such as a drug emergency where an ambulance alone is more appropriate.

However, Diekhoff said police are often sent out on those calls because EMTs and the fire department request officers be dispatched for their safety.

Hypothetically, if BPD were defunded, the city would maintain a smaller police department that would respond to only the emergency calls that require its presence, such as breaking and entering. Over time, as alternate crisis responses become more familiar, the police would deal with fewer calls and need fewer officers. Police departments would gradually shrink as resources went elsewhere to allow social workers, rather than police officers, to deal with social problems.

“I think logistics are what people tend to back away from,” Byrd said regarding the movement to defund the police.

Another important component of reallocating funds is addressing the root causes of problems such as homelessness and drug addiction, she said, which bring people into disproportionate and preventable contact with the police. She also emphasized the importance of centering the voices of the vulnerable and marginalized people who will be subject to decisions that are made.

However, police often get called for these issues, Diekhoff said, and having social work staff embedded in the police department allows for a more streamlined process of turning those calls over to social workers.

Jeremy Carter, director of criminal justice and public safety and director for research for the Paul H. O’Neill School of Public and Environmental Affairs, pointed out police departments have high call rates for non-crime related issues, such as noise complaints.

What are the risks of defunding police departments?

Carter acknowledged challenges to defunding the police, such as the risk of under-policing. He said the idea of removing police presence to protect minority communities could backfire because of the high victimization rates of those communities.

He referenced a June 2020 Washington Post op-ed written by Rod Brunson, a professor at Northeastern University.

“If you were to just map crime, you will see the highest number of victims in those same [predominantly minority] communities,” Carter said. “How do you balance that reality with also having an appropriate police response and presence? That's a tricky thing to navigate.”

But Chakrabarti-Myers said those communities are often victimized by the police themselves and are heavily overpoliced.

“I will be much less concerned about that when Black and Brown people aren’t being terrorized and victimized by the police themselves,” she said.

Why divert money away from police instead of reforming how it’s spent?

In his memorandum to the 2021 budget, Diekhoff said “BPD strives to provide a transparent, bias-free, equitable environment for all people we serve.” He also mentioned efforts to make BPD reflect the demographic makeup of Bloomington by recruiting a more diverse workforce.

BPD has a downtown resource officers unit that works with people experiencing homelessness. In July, the Stride Coalition opened a 24-hour crisis center where officers can take people experiencing mental health and addiction crises instead of taking them to jail. The center is staffed by Centerstone, a not-for-profit health system providing mental health and substance use disorder treatments.

Only law enforcement officers can refer people to the center. Diekhoff said this is because the police have the most contact with individuals who would need their services and expects that once the center is more established, it may begin to take walk-ins and non-police referrals.

Byrd said she is troubled by the neighborhood resource officers, whose stated job is to work with people experiencing homelessness.

“They’re unarmed, but there are increasing patrols in neighborhoods,” she said.

She said the increase in patrols would disproportionately affect areas that are already overpoliced.

Byrd also said the Stride Coalition crisis center and some of Centerstone’s other efforts, while well-intentioned, are still coercive.

“It is right by the jail,” she said of the crisis center. “It looks like a locked facility. It was extremely expensive.”

She said from her conversations with the people who could be recipients of that service, it is not a place they would want to go.

Byrd and Chakrabarti-Myers both argue that police departments hiring social workers misses the point. Instead, those in favor of defunding the police want to reallocate funds away from policing altogether into existing social services so people experiencing mental health or addiction crises do not have to come into contact with the police in the first place.

But Diekhoff said many people, including social workers, are in favor of embedding social workers in police departments. BPD’s lone social worker has been able to affect positive change in people’s lives after she encountered them through police contacts, he said, including working with the elderly and children and connecting people with the services they needed.

Because the police get non-crime related calls, such as for homelessness and mental health issues, having a social worker in the department allows BPD to turn those cases over to her, which would be more difficult if funds were reallocated away from the police and those calls still went to police.

“We've been consulted by a variety of different departments from around the country about how we set our program up so that they can do the same thing,” he said. “We certainly don't impede upon what they need to do and what their ethics require them to do.”

There is currently only one social worker employed by BPD.

Where does BPD’s money go?

BPD’s budget has steadily increased over the years, while its share of the general fund has fluctuated around 30%. The general fund is the city’s discretionary fund, which relies heavily on property and sales taxes and funds city functions such as police, fire and other community services.

The police department’s budget for next year, if approved as proposed, would come to about 38.1% of Bloomington’s general fund.

BPD receives a larger proportion of the city’s general fund compared to the following cities of other similar-sized Big Ten schools.

About 82.5% of the proposed 2021 BPD budget would go toward personnel services, such as wages and insurance.

The largest proportional increase would be an 11% increase in funding for supplies. Notable requests include $15,000 for gas masks and $6,000 for less-lethal weapons, which are generally considered riot control supplies. Diekhoff said the gas masks are not only for tear gas but also for other hazardous chemicals that companies in the community possess, and they would protect BPD officers in those situations as well as riot control situations.

At a city budget hearing in August, Diekhoff said he couldn’t remember the last time the department used the less-lethal weapons it has access to, which include pepper spray, rubber bullets and tear gas. He did not specify contexts in which such weapons might be used in the future, or whether he anticipated using them.

In his 2021 proposal, Diekhoff also projected an increase in the amount spent on rifles and handguns through 2030.

In the proposal, BPD said it served 85,000 people, in line with census estimates of Bloomington’s population. This estimate includes students.

IUPD and BPD often assist one another due to call volume, and both police departments have jurisdiction throughout the city and on campus, according to IUPD Deputy Chief Shannon Bunger. Collaboration between city and campus police departments is the practice nationally recommended by the Department of Justice and Major Cities Chiefs Association.

BPD’s full staffing under the 2021 proposal would be 100 sworn officers, reduced from 105. BPD has 98 sworn personnel currently, and IUPD employs 45 full-time sworn personnel. According to the IUPD website, IU is the only university in the country that allows students to work as police officers, a program students and activists have criticized.

During the school year, Bloomington has about 16.5 officers per 10,000 residents, with that ratio increasing in the summer months when many students leave. This is slightly less than the number of officers per capita in comparable Big Ten cities.

Part of the reason activists want to reallocate funds away from the police is to reduce overpolicing. Chakrabarti-Myers said Bloomington is policed by seven different police departments — BPD, IUPD, Indiana State Police, Monroe County Sheriff’s Office, overlapping jurisdiction with Ellettsville, IU Health Police Department and the Department of Natural Resources’ Law Enforcement. Only IUPD and BPD are reflected in our graphic.

Dissonance in due process

By Cate Charron | 6 hours ago 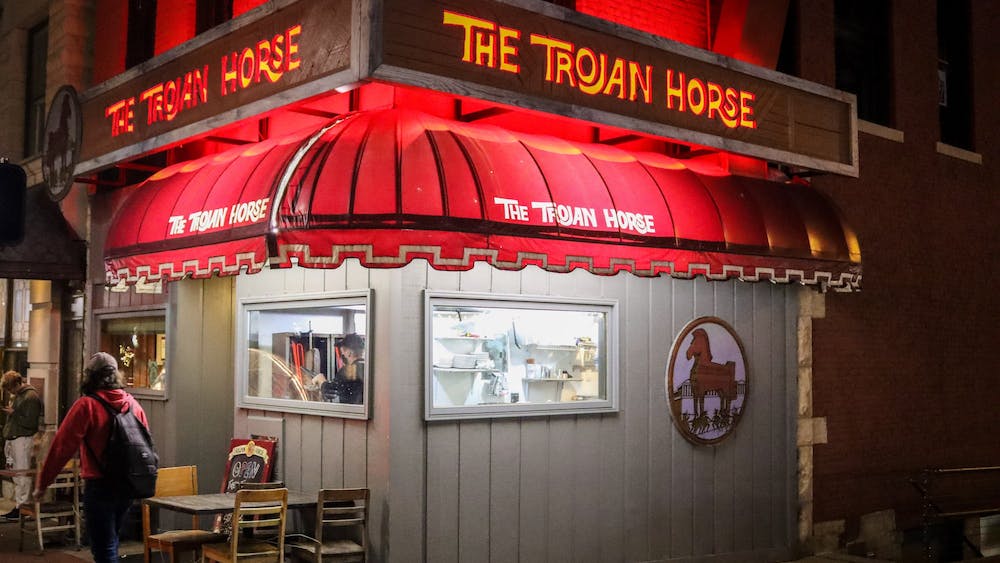 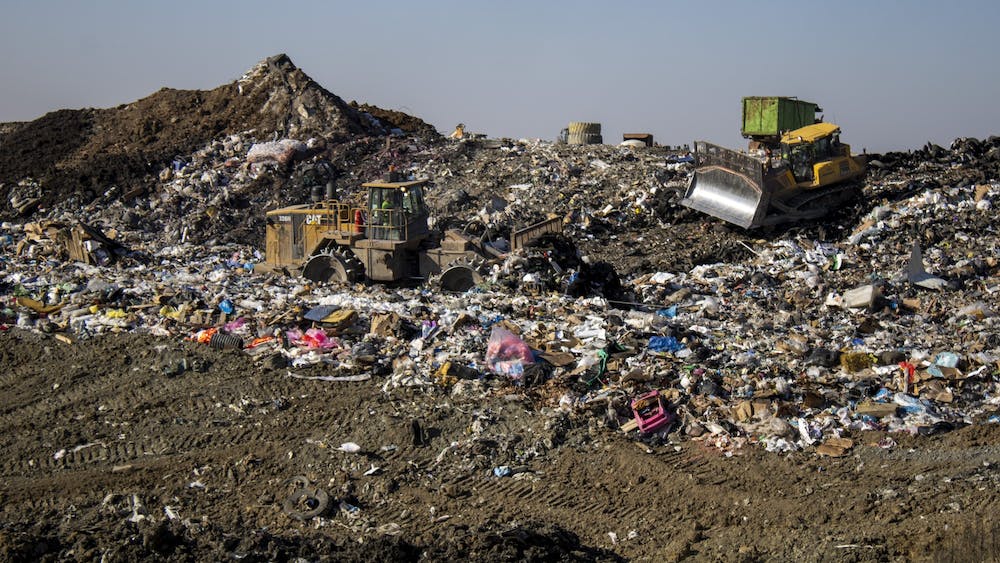