Charles Murray’s exit from Presidents Hall happened just as quickly and quietly as the promotion of his talk days  before.

As he gave his speech Tuesday evening, the controversial social scientist’s voice carried over muted noises that, from inside the building, sounded like a broken metronome and people screaming on a roller coaster.

“What I’m going to do is I’m just going to ignore them,” he said.

Outside, the sounds were much clearer. Protesters filled the area between Franklin Hall and Sample Gates and screamed, “Fuck Charles Murray.” One man banged a pot with a tire iron near the windows of Presidents Hall by Indiana Avenue. A Twix bar hung casually from his mouth.

As he clanged the metal objects together, Tom Westgard, 46, said he wasn’t worried about the police or the barricades they had set up in front of Franklin Hall, especially because his new spot was not guarded by law enforcement.

“I’m not sure there’s much they can do with me outside on a public sidewalk,” Westgard said.

Although Westgard, a Bloomington resident, has protested in the past, he had never used this noisy method before. The pot was severely dented on the bottom from his banging, and he said his girlfriend’s pitbull, Birdie, probably wouldn’t be able to use it as a dish any longer.

On the other side of Sample Gates, a young boy in a unicorn mask stood on the makeshift fence and raised his middle fingers to police. The yellow Batman logo on his black shirt matched the POLICE LINE: DO NOT CROSS tape behind him.

Just as its Facebook event promised, the English Graduate Solidarity Coalition showed up and helped lead the protest.

Graduate student Anushka Sen stood on the cement edge of the flower beds outside Franklin Hall and shouted angrily into a megaphone.

As a student from India, she said she had felt most at home with students advocating for IU to be a sanctuary campus.

Sen said there is nothing inherently wrong with conservative speakers on campus, but Murray’s extremism was a step too far for her.

“There can be diversity within the notion of equality,” she said.

On Monday afternoon, senior Stella Shaffer burned her ticket to Charles Murray’s event in a Facebook Live video. As she stood in Tuesday’s protest, she was detained by police for a reason she said she did not know.

It took a crowd of protesters, whose bodies were crushed together and whose noses were inches from police, screaming, “Free Stella” before the police finally let her go.

Yesterday Shaffer said she was unsure if she would attend the protest for academic reasons.

By going, the consequence she faced with the  detention sparked a specific fear as a transgender woman.

“I was scared they would send me to men’s jail,” Shaffer said.

The protesters waited outside every door of Franklin Hall as the talk came to a close to confront the controversial social scientist despite the police barricades keeping them yards away from the building and Murray.

By the time he left, protesters were spread out around the building.

Community advocate Joe Samalin, 41, watched as Murray was escorted out of Franklin Hall and into a black car. The car drove from Indiana Avenue onto the red brick sidewalk, went through Sample Gates and disappeared into campus.

She was arrested in July for carrying a sign protesting Schooner Creek Farm. 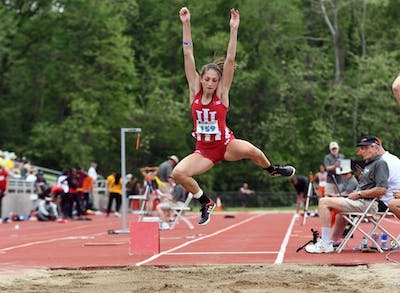 IU track and field to return to Bloomington for Gladstein Invitational

IU junior Cooper Williams is No. 1 in the country in the 800-meter.

Some of the equipment inside was damaged.