Bloomington City Council members are responding to opposition regarding the city’s decision to use sharpshooters to cull the deer population at Griffy Lake Nature Preserve.

Among those in opposition are members of the Bloomington Advocates for Nonlethal and Innovative Deer Stewardship (BANIDS). They addressed two members on the Bloomington City Council, David Rollo and Andy Ruff, in a prepared statement.

“Council members David Rollo and Andy Ruff’s rejection of humane deer management is based on an unsubstantiated assertion,” BANIDS said in the statement.

Rollo said only lethal solutions could work to control the deer population at Griffy. He said sterilization is not an option because deer are able to move in and out of the nature preserve.

“There are no examples of immunocontraception or sterilization working in an open system,” Rollo said. “It’s a very basic concept, and it’s not imaginary.”

BANIDS specifically addressed the council members’ claim that the Griffy Lake Nature Preserve is an “open system,” saying their claim was not backed up by science.

“That’s ridiculous,” Ruff said about the BANIDS claims. “That’s a ridiculous claim, and they know it full well.”

Ruff said years of research have been done and that the matter has been decided.

BANIDS said in the prepared statement that it is calling for a two-year moratorium in order to give what they believe would be a more accurate count of the deer population around the nature preserve.

Councilman Rollo said the situation at Griffy is urgent.

“The fact of the matter is that every year that this overgrazing by deer occurs, we run the risk of what’s called the legacy effect,” Rollo said.

The Bloomington Parks Board approved a contract to hire sharpshooters to cull the deer population around Lake Griffy. The contract was awarded to White Buffalo Inc., a nonprofit wildlife management organization for $31,000, according to a BANIDS news release.

According to the Deer Task Force Report put out by the City of Bloomington in conjunction with Monroe County, the deer population inside the nature reserve is harming vegetation diversity and poses a potential threat to drivers.

Among the lethal approaches considered to cull the deer population were sharpshooting, hunting, trapping and killing.

The city chose sharpshooting because it believed it to be the most effective and humane way to stem the rise in deer, Rollo said.

“When there’s no evidence, nothing on the horizon, there’s nothing to be equated to, to say in a year there will be this nonlethal technique that is shown to be efficient and proven to work,” Ruff said. 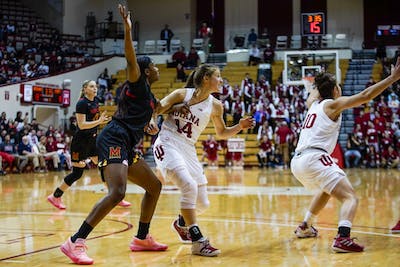 A collection of 125 cats videos will be screened.