The start to IU Coach Teri Moren's fifth season in charge of the Hoosiers has been her best.

IU defeated Missouri State University on Sunday, 98-74, to improve to 9-0 this season.

The Hoosiers remain unranked after picking up two wins this week against Butler University and Missouri State, but received 12 votes in the most recent Associated Press poll.

On Monday at the Holiday Inn in Bloomington, Moren discussed improvements, bright spots, injuries, recruiting and more during her radio show "Inside IU women’s basketball with Teri Moren."

Here are three takeaways from the show.

This has been a common theme all season as Patberg, Wise, Penn and Yeaney are all averaging double digit points per game.

But what made Sunday so impressive was that the Hoosiers did most of their damage inside the three-point arch. IU scored 62 points in the paint and 14 points from free throws. The Hoosiers only hit four three-pointers in the game and attempted just six.

“We just played off of each other,” Moren said. “That motion offense has really been good to us. We are really taking advantage our athleticism and putting it on the deck. It gives our kids a lot of freedom and they really like that.”

2. Aleksa Gulbe expected to be back in IU’s next game.

She has missed the last two games, but Moren said her rehab is going well and that she expects to have Gulbe available for IU's games Dec. 19-21 in Puerto Rico.

Gulbe is averaging seven points and four rebounds per game off the bench this season. She gives IU a dynamic role by being able to block shots defensively and stretch the floor offensively. She leads the team with 11 blocks this season.

Moren said this 10-day break with finals is an opportunity for not just Gulbe, but for the whole team, to rest up and recover before competing again.

For the first time this season IU will be playing games with little rest in between.

As part of the Puerto Rico Classic, IU will play three games in three days. The first game will be against Loyola Marymount University, then Grambling State University and finally the University of South Dakota.

Moren stressed the importance of her team learning how to win outside the confines of Simon Skjodt Assembly Hall, and there’s no better opportunity to practice then to play three-straight games in as many days on the road.

Not only does it help IU’s road play, but Moren said it will help the team prepare for the postseason style of play.

Like the Puerto Rico Classic, the Big Ten Tournament consists of consecutive games and the NCAA Tournament allows just a day or two between games.

“If you win, you play the next game,” Moren said. “That’s how we’re going to approach it. We can’t go over to Puerto Rico and be thinking about Christmas, so I’ve asked them to really try to hone in on what we’re doing in Puerto Rico and then they can go be with their families. I think they feel really good about this team and how we are progressing and how we are getting better.” 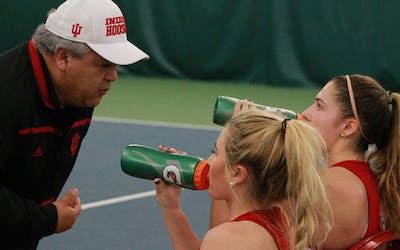