One of the best parts of Violet Hall’s 3D-printed arm is the pair of pipe cleaners she can attach to hold her violin bow.

In fourth grade, which she starts in the fall, they learn to play an instrument. Most of the students at Binford Elementary will learn how to play the recorder, but not Violet.

Violet, 9, was born without her right hand or forearm. Ever since, her parents have tried different prosthetics to help her do what other kids do almost everyday — ride a bike, climb the monkey bars or play an instrument.

Now, Violet is closer to doing those things thanks to the work of an IU researcher who worked to print her a 3D hand this past spring.

Milet attended the IU Science Fest with her two daughters last year. They had a 3D printer out for people to try and she was amazed.

“I thought it was so cool that you can make anything and everything out of it,” she said.

She later went home that day and researched it further. She found a site from a group called e-NABLE, which has created an open source network of people who need prosthetics and those who have 3D printing capabilities.

Jon Racek, a lecturer in the School of Art and Design, saw the post and reached out to the Halls, who attend the same church and have kids in school together.

“I have been working with 3D printing for a while and am convinced that beyond what you usually see, which is people printing cell phone covers and keychains, there are profoundly important things that 3D printers can do,” Racek said in an email.

“I saw this as an opportunity to use this technology in an important way. Personally, I know Violet and she is a very special little girl. I saw the opportunity to help and took it.”

Racek first took Violet’s measurements in the fall of 2016. They worked on creating a hand that Violet could use, based on designs found on e-NABLE’s website.

Her first fitting was in January. They adjusted the measurements — Violet had already grown since the fall — and asked her what she wanted it to look like.

Violet chose red and black as the main colors and wanted to put a yellow star on the back of her hand.

“That’s the hardest question,” Violet said. “I have no idea.”

“Everyone asks that,” Milet said. “She just likes stars.”

Racek went back to the lab and printed another prototype, which Violet received in April.

“Since then we’ve been having people asking her about it left and right,” Milet said. “For the most part people are just curious, but I don’t think people ask more or less than they already do with her arm.”

She mostly uses the arm to play the violin, which she recently picked up. As for daily things, she doesn’t quite use it as often because she’s afraid its going to break.

But thankfully, if she does break or outgrow a piece, the Halls only have to visit the lab at IU to have a new part printed.

In the past, Violet has used more complicated and expensive prosthetics. The last one was attached with a silicone glove that would squeeze her arm. It had a small screw and a hook with a button, which pinched her a few times. It also had to wrap around her whole body because her arm wasn’t strong enough to support it.

Now Violet can play the violin, but she’s still working on riding a bike. The grip isn’t as strong, so they need to work on some safety features before they let her ride.

“You could try using it on your scooter,” Milet told Violet at the library one afternoon.

“But I like using the scooter without it,” she said.

Violet also can’t use it to climb because of the weakness of the grip. But as Violet uses the arm more, she'll learn how to use all its features. In the meantime, technology will only continue to develop.

“Small things like that that seem so normal but really is taken for granted a lot of times,” Milet said. “For her just to have that chance to play an instrument or hold something in one hand and something else in another is incredible.” 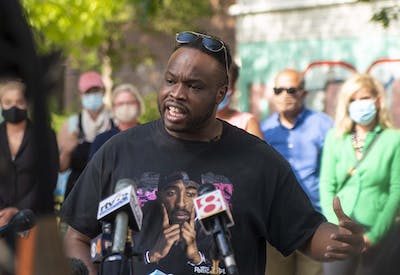