“Yes means yes, no means no, victim blaming’s got to go!” Ashley chanted with a crowd of about 60 people.

“A woman or anyone should be able to dress or present however they want without being harassed,” said Ashley, who scrawled  “#BodyPositivity” across their chest.

Slut Walk began at 6 p.m. in Dunn Meadow, where the FSA set up a photobooth, tables for poster making, trivia and “slut statements.” Middle Way House also set up a table to raise awareness about abuse and sexual assault. Meg Davis, a sophomore, said this was her first Slut Walk.

“It’s also the first time I’ve talked about my sexual assault,” said Davis, who posed at the photobooth with a white board that read, “I wasn’t asking for it.”

“I’m just glad to be in a giant circle of feminist people,” she said.

Casper Mendes, an agender high school student wearing a crochet vulva pin on their jacket, made a pink, blue and purple poster that read, “Love All Sluts.”

“Every gender that’s out there needs to be a part of Slut Walk,” Mendes said. “Everybody is affected by gender stereotypes. Feminism matters.”

At the Slut Statements table, visitors were encouraged to write down their own experiences with harassment. FSA member Sophia Muston said the club plans to use the statements to create suggestions for the IU Student Association on changing campus culture.

“We wanted to be more interactive this year,” FSA member Carmen Vernon said. “Slut Walk is often criticized for being very white and middle-class, so we thought it was important to  acknowledge other voices.”

“We are not your China dolls or dragon ladies,” Kwong said. “We are warriors, we are survivors, we are human  beings.”

After the speakers finished, the crowd marched into downtown  Bloomington.

“This little black dress does not mean yes,” they chanted.

A group of men eating outside Noodles & Company on Kirkwood laughed as girls in bras and Daisy Dukes strutted past them. IU Dance Marathon fundraisers  carrying red buckets looked  confused.

“I guess you’ve got to  respect the message,”  one said.

Across from FARM Bloomington, Ann Shedd turned to her 8-year-old daughter.

“I don’t know if you understand this, but I’m going to explain it to you,” Shedd said. “They’re saying, ‘Just because I look good doesn’t mean you can touch me.’”

Shedd said it was hard to tell her kid why nearly naked people with duct-tape  covering their nipples were marching down the street, but her daughter understood the message.

“What’s the rule?” Shedd said. “Do we let anybody touch us without  permission?” 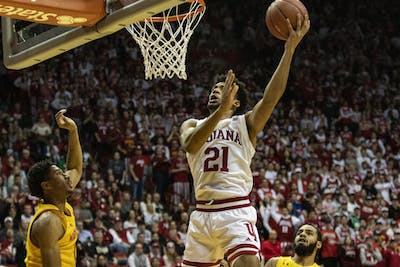 Jerome Hunter shows signs of improvement in loss to No. 17 Maryland

Hunter scored in double digits for the first time since Nov. 12. 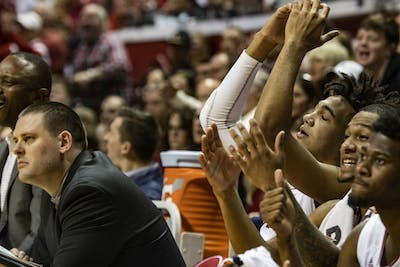 Maryland scored the game winning basket with 14.5 seconds to play.