Former IU Deputy Title IX Director Jason Casares will not face criminal charges after a sexual assault complaint filed in December was investigated by the Fort Worth Police Department.

Jill Creighton, assistant director for global community standards at New York University, posted an open letter on Twitter on Feb. 3, claiming Casares took advantage of her after having too much to drink at an Association for Student Conduct Administration conference last December in Fort Worth, Texas.

A FWPD investigation found no cause for a criminal case against Casares, FWPD Sgt. Steve Enright said in an email. The criminal case is now closed.

In February, Casares resigned from his position in which he sat on hearing panels to review sexual misconduct complaints filed by IU students.

Creighton said in an email she was not told the results of the  investigation and instead found out through the media. She expressed concern about how her case was handled by the FWPD.

“My experience in reporting to the police exemplifies why survivors do not go to the police,” Creighton said in the email.

Because she filed her complaint with the FWPD after returning home from the ASCA conference, Creighton was interviewed by police in New York. Creighton said she was not allowed to have an attorney in her interview, despite Casares’ lawyer having a heavy presence in the case.

“Detectives only need to speak to a victim,” Enright said. “Additional persons who do not have firsthand knowledge of the incident are not allowed in during an interview as they have no evidentiary information  to share.”

Enright said an attorney could be requested for a person accused of a crime, but that decision is up to the  interviewer.

Enright said he did not know whether the New York detective Creighton spoke to allowed an attorney to be present.

IU is under two federal Title IX investigations, opened by the U.S. Department of Education’s Office of Civil Rights in March 2014 and June 2015 respectively.

An IU freshman filed a federal complaint with the Office of Civil Rights in March after having a sexual assault hearing led by Casares in January.

Shortly after Casares’ resignation, the University launched a review of this case and 16 others heard by Casares in the last  academic year.

The review, led by IU emerita of law Julia Lamber, found the original ruling of all 17 cases would stand.

In an email, Casares emphasized every investigation of Creighton’s claims had yielded the same response.

“There was no assault,” Casares said in the email. “It never happened. I’m choosing to no longer focus on the false claims being made against me but rather my statements and my story that was corroborated in each independent investigation.”

Casares added he believed his professional and personal character shined in the investigation process and he will no longer address the “false and unfounded allegation” waged against him.

“My family has been forever impacted,” Casares said. “The facts have been shared. The results are final. There is nothing left to say.”

Changes include allowing quarterbacks to throw to receivers. 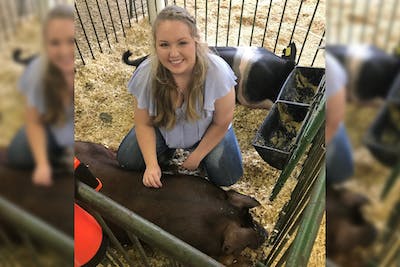 The seniors have shown pigs, sewing projects, cows and photography at the fair.