INDIANAPOLIS – John Girton jolted awake to the crack of thunder.

He stayed in the tent as long as he could. He stayed while the canvas walls trembled from the winds and rain outside. He stayed through the lightning and thunder.

The pastor, 46, had slept in the tent for two weeks now, and he had two more weeks left. He started the tent campaign in September to raise awareness about violence in Indianapolis. Murder rates were climbing. Enough was enough.

He couldn’t leave now, in case someone came searching for help. It could be anyone — a lost kid or a neighbor who needed to talk.

Pastor G set up his tent Sept. 4 at the corner of 30th and Martin Luther King, Jr. streets, in one of the city’s most dangerous neighborhoods. He gave interviews to newspaper and TV reporters. Traffic on his website and Facebook page boomed. But soon enough, interest waned.

When the year began, the murder rate was on pace with 2010, when 93 people were killed. But in July, it spiked. One killing happened less than every two days on average.

Pastor G saw each one flash on his television and cell phone screens — pictures of men, women and  children lost to violence.

That was just July. Eleven more were killed in the first half of August.

Then he heard about Jaylen Johnson. The 16-year-old was shot seven times in the back on Aug. 20, a half-mile from the children’s museum.

Jaylen had been raised by his grandmother since his mother died seven years ago. He was a good kid who got into a bad crowd, Jaylen’s grandmother told Pastor G. He had started a summer job at a restaurant and watched YouTube videos about the power of God. His grandmother often told him to stop watching the videos and get some sleep.

On that Thursday in August, he walked into his grandmother’s house after school. He said “Hey Gramma,” and gave her a kiss. Shortly after, he walked out the front door saying, “I’ll be right back.”

Five minutes later, he was dead.

Jaylen was the same age as Pastor G’s daughter, Faith, and only three years older than his son Edwin. The violence surrounded his church, Christ Missionary Baptist. The faces he saw on Sunday were the ones that saw the violence every day. Pastor G was driving his kids to school one morning when he told them he had a plan.

Faith knew it was dangerous.

“I thought I needed to find another way for him to bring attention to violence, but I couldn’t find one fast enough,” she said.

Two weeks later, Pastor G pitched the tent two miles from the church, less than a mile from the home where Jaylen was killed.

Inside, he unfolded a metal cot and a card table. Ants crawled across the area rugs. At night the temperature dipped into the 50s.

Late at night and into the morning, Pastor G blogged about his days in the tent. He shared stories, testimonies and his own doubts.

Day 7 for me will be the day when I asked, “Is it worth it? Does anyone really care about positive change?”

He wanted to see his daughter’s soccer game and help his son with his homework.

Ten days into the campaign, he started the online crowd-funding page to turn an old warehouse into a refuge from the violence.

The idea had started with his Uncle Melvin, a pastor at Christ Missionary Baptist Church for 52 years. He’d become pastor during the Freedom Summer, as kids were heading south to register blacks to vote and the Civil Rights Act was in the Senate. Four years after he became pastor, Martin Luther King, Jr. was assassinated. Robert Kennedy delivered an impromptu speech about race relations only three miles from the church.

Seventeen years ago Melvin bought a warehouse and a strip mall, hoping to turn it into a destination for the Northwest community, a place where kids could stay out of trouble. But it never happened.

Pastor G joined the church in March. Now, he is trying to keep the building from bankrupting the church.

What Pastor G did was dangerous, Melvin said. The area was nothing like it had been in 1964. Houses had been abandoned, wealthier citizens had moved away and the neighborhood had fallen behind. Retail shops closed and one of the largest employers, St. Vincent Hospital, moved north to 86th Street.

The warehouse was put up for sale, but Pastor G is trying to hold onto it. The last thing he said he wants is another liquor store or cash checking center opening in the neighborhood.

Inside, wood beams showed where wall construction had never been finished. The room was filled with trash — plastic lawn chairs, an empty gas can, bricks, old doors and cardboard boxes.

“Can it be something?” Pastor G said of the building with boarded up windows and chipping paint. “Yeah, it can be something.”

On the fifteenth day, he joined his team outside the warehouse for another ceremony.

Just one cross this time.

“Last week was not a good week in Indianapolis,” Pastor G told the crowd that day. “We rejoice that we’re not putting down six more. But this just proves that our work has to continue.”

Cars slowed on Martin Luther King Jr. Street to watch Pastor G kneel with a hammer in hand. He pounded the cross into the muddy patch of earth.

The people bowed their heads.

In a neighborhood like this one, prayers aren’t enough. The people in the community — their homes, their schools and their children — seem to have been forgotten. Abandoned homes decorated with graffiti, chipping paint and warped siding dot the street. At least five on the block are vacant.

When Pastor G walks the neighborhood, he sees young men and women roaming the streets. Neighbors don’t say “hello” to one another.

After Pastor G placed the crosses, the boys approached him on the sidewalk.

He refused to let them go unnoticed. These kids felt invisible, he said. The community needed to recognize them, care for them.

He invited them to the tent before they walked away.

Down the road, Pastor G pointed to a house with a mattress leaning against the entrance. The thin cushion acted as a door, protecting the interior from the wind, the storms, the rain and the neighbors. Gaping holes in the fabric revealed the clutter and trash inside.

“We know there are two kids living in there for sure,” Pastor G said. “Two kids at least.”

Across the street, black ash stained the sidewalk where kids had set fire to a car. As he walked, Pastor G encountered a neighbor down the block from the church.

“You should come see me at the tent,” Pastor G said.

“Yeah,” the man said. “Sometimes this neighborhood can be a little wicked.”

Later that night, two miles north, a 10-year-old boy went with his mom and brother to a memorial for an elderly woman.

Moments after Deshaun Swanson and his family walked into the house, bullets from outside ripped through the walls. Deshaun was hit, blocking the bullets from striking his mother, who cares for five children on her own.

He died that night at Riley Children’s Hospital.

Pastor G didn’t hear about the murder until later. He never thought one of his crosses would be for a 10-year-old.

“This is not a video game,” Pastor G blogged on Sept. 22. “Believe it or not, God’s anger and wrath is real, and his vengeance is real. To those who are pulling triggers like this is a game, you will pay with your own life and the lives of everyone around you.”

On Friday, his second-to-last night, Pastor G awoke to a phone call at 4:36 a.m. A family who had lost a cousin a few weeks before was calling about their son-in-law.

Pastor G met the man’s wife and his three children at Eskenazi Emergency. Monitors and tubes surrounded the man. But he was alive. They nudged him until he opened his eyes.

The man started to cry. He banged his hand on the bed.

“They shot me!” he said. “The motherfuckers shot me!”

He didn’t know who shot him. But he wanted them “waxed.”

Pastor G had to calm him down and try to change his revenge into reflection. He could only hope it wouldn’t lead to more violence.

“We’re going to do all we can to be here and love them through this,” he wrote on his blog when he got back to the tent. “Stay tuned.”

Sunday was Pastor G’s last day on the corner. Only one person had donated to the crowd-funding campaign. His volunteers had sold fewer than 50 T-shirts. The warehouse was still for sale.

Pastor G prepared to pound six more crosses into the ground. He stood on stage, facing 300 neighbors and supporters.

“I don’t think it’s a secret we’ve had a tough month,” he said. “The Bible said we’d have days like this. But even our grief has to be turned into action.”

Despite the 17 crosses next to the tent, he was proud of the support he received.

“There are people like you all who actually care,” he said.

He handed the microphone to David Hampton, pastor of Light of the World Christian Church. Then someone whispered in Pastor G’s ear.

“We are all one,” Hampton preached to the crowd. “And when one dies, a part of all of us dies. So we must move forward with a hopefulness beyond the violence.”

Pastor G put his hand on Hampton’s shoulder and whispered in his ear.

Another killing on the eastside of Indianapolis. A half-hour earlier and 6 miles away, a 17-year-old male was found dead in a vacant lot next to a convenience store.

Another cross, this one for Steven Kendall.

Seven crosses were pounded into the ground that day. In all, 18 stood next to the street. Seventeen murders in 30 days. And an 18th cross for Jaylen Johnson, who died before the campaign but whose family had visited the tent.

After the rally ended, people drifted from the parking lot.

Members of Pastor G’s team pulled the mud-covered tent stakes from the ground. They rolled up his rugs and folded his tarps. People posed for pictures in white “Unite for Change” shirts with Pastor G in front of the tent and warehouse.

Sunday night, after the pictures had stopped and the tent had collapsed, Coriana Johnson, 17, and Makayla Mitchell, 18, were shot dead in a car on the west side of Indianapolis, bringing the murder count for the year to 105.

The General’s shadow: How author John Feinstein survived a year with Bob Knight 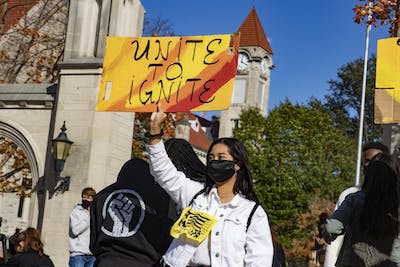 Students held signs and listened to speakers in front of the Sample Gates.