COLUMN: Three albums to listen to in quarantine

Now that Indiana has joined Illinois, Ohio, Connecticut, Louisiana and Kentucky in enacting a mandatory shelter, it doesn’t look like the prolonged boredom of social distancing is coming to an end any time soon.

As the days start to feel longer, it might be tempting to ignore the rules of self-isolation and meet up with a few friends. Instead, try hanging out with musicians Ella Fitzgerald, Aurora and BJ The Chicago Kid to pass the time.

‘A Different Kind of Human (Step II)’ by Aurora

“Bored, everyone’s bored,” Aurora sings in “Daydreamer,” the fourth song off her third album, “A Different Kind of Human.” Though the album was released last year, the Norwegian singer echoes the sentiments of self-quarantiners across the nation.

Aurora’s fantastical lyrics navigate nature, human existence and self-reflection, packaged in electronic pop layered with synth, bouncing percussion and the singer’s characteristically light vocals. Her message, delivered either in reverberating chants or sprawling melodies, is often commentary on an aspect of society. “The Seed,” for example, addresses the need for action against climate change.

Grappling with uncertainty is also a focal point of “A Different Kind of Human,” making it perfect at a time when uncertainty is the most driving factor of our society and in our personal lives. Better still, the uplifting feeling of songs such as “The River” point to a message of hope and positivity, a reminder many of us may need right now.

‘In My Mind’ by BJ The Chicago Kid

Bryan James Sledge, who goes by BJ The Chicago Kid, is joined by a few familiar voices such as Kendrick Lamar and Chance The Rapper on his album “In My Mind,” which honors Chicago soul music and explores love, sex and inner turmoil in explicit detail.

Though undeniably grounded in R&B, songs from “In My Mind” borrow from other genres and sometimes even take the shape of showtunes. Spliced between pieces of spoken dialogue, the verses in “Wait Til The Morning” resemble musical theater monologues as Sledge begs the listener not to tell his girlfriend that he’s cheated on her. Isa makes a cameo as this girl, closing out the track by begging Sledge to just be honest with her in an extremely Hamilton-esque fashion (if you’ve fallen off the bandwagon in the past few years, the Hamilton soundtrack might also be a good album to revisit).

If nothing else, the disjointed lyrics, tempo and instrumentation of songs such as “Crazy” serve as a sonic representation of our collective descent into insanity as a result of self-isolation.

If social distancing has you feeling a little lonely, the First Lady of Jazz makes great company.

The two-disc compilation of 43 of the late legend’s ballads dropped mid-March, just in time for the end of life as we know it.

From beginning to end, the album maintains a simple instrumentation of piano, Fitzgerald’s iconic vibrato and occasionally an upright bass. In contrast with the others on this list, the only bobs and whistles on this record come in the form of flourishes which pianists such as Oscar Peterson and Ellis Larkins add to complement Fitzgerald’s voice.

The warm, stripped-down composure of the album makes classics such as “Misty” and “Stardust” sound like Fitzgerald is performing an intimate concert in your living room. When quarantine begins to feel a little unbearable, simply press play to feel like one of the greats is singing only to you.

COLUMN: Here's how I make sure I'm ready for online classes

Here are some some ways to ensure you're productive while working from home.

A visiting voice lecturer incorporates acting skills in the teaching of opera. 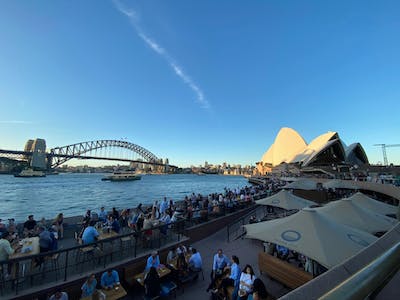 COLUMN: Leaving Australia amid a pandemic

My study abroad program was cut short due to COVID-19.