OPINION: Celebrities should be willing to get arrested for the cause

Jane Fonda has been arrested for protesting climate change again — this time with Ted Danson. This is the third consecutive week that Fonda has been arrested at the U.S. Capitol, and the last two times she has brought other famous actor friends to join the protests with her. Naturally, the reception to her actions has been mixed. Many applaud her efforts, while many others do not, but the reasoning is varied. Of course there are the people who do not agree with her cause, but at the same time, many others believe she is not doing enough. In Fonda’s case, she is definitely doing far more than most other celebrities, especially those with her acclaim. At the same time, there is a valid argument that every single celebrity should be doing more, especially when it comes to their money.

Fonda has been an outspoken activist for her entire career. She is perhaps most well known for opposing the Vietnam War in the late 1960s and 1970s, but at the same time, she was also fundraising for the Black Panthers and protesting in support of multiple Native American causes.

In 1972, she actually visited North Vietnam to speak out against the U.S. military presence. Her actions lead to extreme criticism from the U.S. government, with some lawmakers even suggesting she should be prosecuted for treason. This history follows her even today, as people keep bringing up her history with the Vietnam War to criticize her. Megyn Kelly called her out on the Today show in 2018 for this reason.

She continues this activism today and in the past years has protested at Standing Rock and now currently the U.S. Capitol in support of climate policy reform. This is all to say that the 81-year-old actress seems to know what she’s doing and is obviously not new to activism. She knows she has the power and privilege to get arrested and not face any real consequences, especially as she can afford to pay bail.

Fonda said to the Los Angeles Times, “There is so much going on in the world and over it all is this ticking time bomb ... but we do have time. We have time, and it’s going to require that people in every country all around the world organize and mobilize and — if necessary — bring governments to a halt if we can’t make them do the right thing.”

Of course, Fonda’s net worth is $200 million. She is far richer than the average protesters fighting for their own liberation. Because of this, it can be hard to get on board with a rich celebrity getting publicly arrested each week when they aren’t redistributing their own wealth directly to the cause or the people most directly affected by the cause, which would be the ideal form of celebrity activism. It’s perfectly valid, and in fact good, to demand more from rich people when it comes to saving the earth.

It is also valid to question whether or not we should be looking to rich celebrities to lead us in activism movements. If the goal of leftist activism is essentially to liberate the oppressed working classes, is it possible to achieve this goal when the leader of the movement’s mere existence is a hindrance to that goal? It’s hard to come up with a clear answer to that question.

One counter argument is that it can create a safer environment for protestors when someone with the resources to be arrested takes the fall, and someone with that kind of power can create space for more protestors to do the same. Having people with a level of fame also makes the protests themselves much harder to ignore, as celebrities are going to draw attention no matter what. Ultimately, it’s not possible to turn activism into a game of purity politics. It’s not always possible to achieve a goal without implementing actions that might be deemed as problematic by some, and while it is helpful and necessary to question everything, denouncing these protests outright does nothing to help anyone.

Along with that, there are so many celebrities with double her net worth who do absolutely nothing to help any cause, much less those with a history such as criticizing U.S. imperialism to its face during the Vietnam War. Hopefully many of them will follow her example. It helps that she is bringing along many other celebrities with her, urging them to get arrested with her.

When it comes down to it, Fonda’s activism is a net positive. She raises awareness to many important issues and uses her privilege for the better. There is always more to be done, especially for rich celebrities and millionaires, but when it comes to activism and organizing, it is better for people like her to be on our side than against us.

OPINION: Is cereal a soup or a salad?

Many words in the English language have hilariously loose boundaries.

OPINION: Democrats need to win over nonvoters in 2020 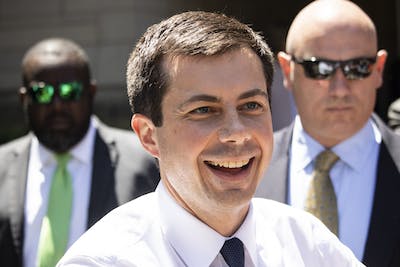