While President Trumps new executive order is only eight days old, groups like the Muslim Student Association, said they had both feared and planned for something like this ever since the end of the election. Trump’s executive order halted immigration from seven Middle Eastern countries and created both fear and uncertainty for immigrants and international students at IU.

Many students have concerns about the immigration ban and what might follow for those affected, said Luma Khabbaz, an IU sophomore and the public relations chair for MSA.

Muslim organizations like hers have been planning to support students in what may be a difficult time and other religious groups are also taking action in one way or another.

“There are many within the Muslim Student Association who are affected,” said Luma Khabbaz, an IU sophomore and public relations chair for MSA. “But there are also many who are affected and not members of MSA. We want to show we will be there for people who are affected regardless of who they are. We will support them.”

Khabbaz said, as an  organization, MSA has been preparing for a situation like this since the election  results.

She said MSA is trying to coordinate with other groups to make sure no one feels they are alone and  unsupported.

Hossain said she wishes IU would declare campus a safe zone for students facing the ban and publicly state it will not release the legal status of their students.

“Minorities are coming together,” Hossain said. “I hope the spirit lasts and continues to grow.”

On Wednesday evening MSA organized an event for National Hijab Day. Khabbaz said the event was a chance to learn about hijabs and try them on.

“I hope the event will be a chance to talk,” Khabbaz said. “To show everyone that even though some women wear hijabs, they are real people too.”

While Muslim students and organizations have been vocal about their concerns, there has been little attention from other religious groups. Student religious organizations say this is because it is a political issue, not a religious one.

“As an organization we try to stay away from politics,” Grace Padget, Hoosier Catholic member, said. “There are Catholics on both sides, and the church has not decided to act in any one direction.”

While the Roman Catholic Church has made no overt political statement, the United States Conference of Catholic Bishops did release a an announcement reaffirming their concern for all human life and for refugees and immigrants.

“We must screen vigilantly for infiltrators who would do us harm, but we must always be equally vigilant in our welcome of friends,” according to the press release.

Other bishops in the U.S., including Cardinal and Archbishop Blase Cupich of Chicago, have also said similar things about the need to reach out to those immigrants and refugees with mercy and understanding.

Richard Woelmer, pastor at University Lutheran church, said his church will probably not be doing anything specific, although he understands why people are concerned.

“The whole situation could have been handled better,” Woelmer said. “The president is doing what he said he would do. The ban is not permanent. This is just until a better vetting process can be put in place.”

Though he has not planned any events regarding the ban, Woelmer said he is looking at the issue from a Christian standpoint. He said he wants to extend love and compassion to  everyone.

He said it is an extension of the commandment to ‘love thy neighbor,’ even if they are a stranger.

Julie Ross, vice president of St. Paul’s Hoosier Catholic, said they, too, will be praying.

“We love all our brothers and sisters and continue to pray for the best possible outcome,” Ross said.

Although Hoosier Catholic has nothing planned right now, they will continue to pray for all those affected. Padget said she wished she could do more for those in need.

“If I were not renting an apartment with other people and leaving after this semester,” Padget said. “I would like to support and help house students who have visas.”

Padget said she wished a Catholic organization would issue a statement saying all life is valuable, refugees and people of all nationality and creeds included. 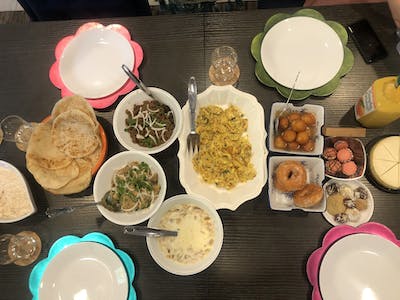 Muslim students found ways to mark the holidays in times of social distancing and COVID-19.

IU celebrates Yom Kippur, one of the holiest Jewish holidays 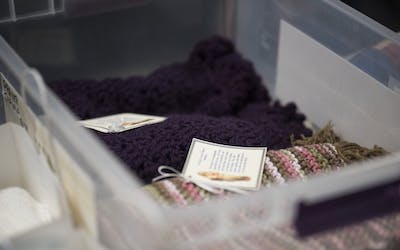 St. Paul's parishioners knit for those in need.