For Martin Aguinis, living in the United States is a gift given to him by his parents. He doesn’t take it for granted and uses it to create opportunity, Aguinis said.

The IU senior, who is originally from Argentina, has created three apps in his four years at IU.

Aguinis said he moved to the U.S. when he was four years old. His father was pursuing his MBA, and his mother was working as a psychologist.

His parents’ goal was to move back to Argentina eventually, but Aguinis said they decided not to because of the security and opportunity the U.S. provided them.

Aguinis said he developed the apps to bring convenience to IU students and members of the Bloomington community.

“I love using technology as the sources to bring improvements to people,” Aguinis said, “I’ve found a way that I can impact people and use my skills and passions for that.”

GreekRide was developed in 2014 when Aguinis and two other men in greek chapters, Liam Bolling and Ben Gavette, realized there was a flaw in the pledge ride system, and they wanted to create a solution to what Aguinis said they saw as an inefficient system.

GreekRide is temporarily off app stores because it is being reworked to create a simpler, more efficient experience for users, Aguinis said.

Aguinis said the goal is to rebuild the app so it can eventually expand their market from just greek organizations to other organizations and businesses.

Aguinis said he views his company, Eventlist LLC, as an umbrella company that will continue to create  various apps.

Eventlist, which launched earlier this month, is the company’s main app. It provides users with information about events happening in Bloomington.

BarPay, an app that allows users to pay bar covers using their phone instead of cash, is the second app the company has developed, Aguinis said.

His company’s mission is to make going out more efficient for students.

He said it’s not just about the events happening or the specials available but showing users a live picture of what’s happening at the events.

The company’s goal is eventually to merge the apps and add another feature that will be similar to Snapchat stories. This feature is intended to show users what the atmosphere is like and if there are a lot of people at the event.

Aguinis said he likes his company and is continuously creating more content and improving old content because he likes to stay busy.

He said he lives by the saying, “If you want something done, ask a busy person to do it.”

“I think that one of the reasons why I’ve worked so hard throughout my life is because I appreciate the fact that I can start whatever I want here and fail early and fail often,” Aguinis said.

Many of the opportunities that have been offered to Aguinis would not have been presented to him if he had not moved to the U.S., he said.

“I see kids I grew up with when I was very young. I stay in touch with them, and they’re very smart people, but they just don’t get as many opportunities.”

Aguinis said creating these apps has changed his college experience for the better because he has been able to change other people’s lives for the better.

Throughout his experience, Aguinis said he has been given the opportunity to create his own path and broaden his perspective.

“I’m not going to sit in class just to get the A because society tells me to do that. I’m really going to absorb the information and use it to create my own value and create my own impact in this world,” Aguinis said.

After graduation Aguinis will start working as a marketing manager for Google. Although he said he is not sure where he will be assigned, he is excited for the opportunity to influence people’s lives with the  company.

IU to receive more than $60 million from federal stimulus

More than $24 million was allocated to IU-Bloomington. 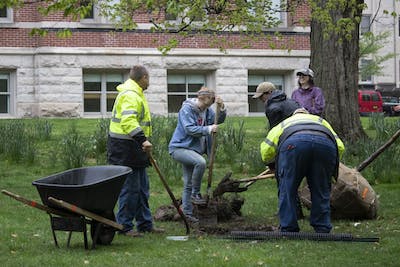 IU is empty, but its landscapers still make campus bloom

The crews mix feathery daffodils and tulips with sturdy trees.