Bloomington Democratic and Republican leaders have opposing views when it comes to the Indiana Voters phone application.

Indiana is one of 31 states that allows voters to register online, according to the National Conference of State Legislatures. It is also one of the few states to have an app on iPhone and Android that provides instant access to voter registration. The Indiana Voters app was first released in 2014. However, this will be the first year in which Hoosiers can use the app to register to vote in a presidential election.

“I think it is taking away the excuses that, ‘Well, registration is too hard,’” said William Ellis, chairman of the Monroe County Republican Party. “Well, guess what, there’s an app for that. Once you have it and download it, you really have no excuse.”

In the past, voters had to go to the Bureau of Motor Vehicles and fill out a paper form, which was inconvenient, said Valerie Warycha, deputy chief of staff and director communications at the Indiana Secretary of State’s office. Now anyone can register from the palm of their hand.

Based on Ellis’ experience with the app, he said he found it appealed more to young people.

Mark Fraley, chair of the Monroe County Democratic Party, said he thinks the app was designed with those on college campuses in mind.

Ellis said the Republican Party is struggling to convince some of its members to utilize the app because the party’s voters tend to be older.

The average Republican voter is age 49.7 in comparison to the average Democrat voter, who is age 47.7, according to the Pew Research Center.

“They’re scared of technology,” Ellis said. “It’s embarrassing, but it’s the reality of it.”

Ellis said he believes the problem will be resolved once the party trends younger.

Due to various issues with the online and mobile platforms, the Democratic Party is still relying on paper forms to register voters, Fraley said.

Fraley said paper forms, unlike the app or online registration, are always accessible. He said the Democratic Party is also interested in collecting and maintaining voter information, so when election time comes, the party can reach out and call those who registered and ask them if they voted.

For large register-to-vote events, volunteers not wanting to hand over their phones or laptops to a stranger is an additional problem, assistant professor of political science Bernard Fraga said.

The paper forms are a more familiar process, easier with large numbers of people and require a social security number to validate citizenship status, unlike the app or website, which requires a driver’s license or state ID number, Fraga said.

The paper forms can be used in more cases, Fraga said. He has spoken to student groups about this issue, and they all say the paper form is more useful — especially for freshmen — than online or mobile registration platforms because they may not have a driver’s license or haven’t updated their license to their new Indiana address.

The app is most useful for staying informed by finding one’s polling location and seeing who is on the ballot as well as checking one’s registration, Fraga said.

“I think the app is going to be most effective in helping people check their registration,” Fraga said. “You can instantly find out if you’re registered or not. That’s where I think the power really lies in that.” 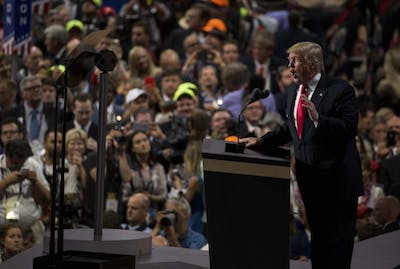 Bill Pascoe, legislative coordinator for the Tea Party Patriots, spoke at the meeting.

The Office of the Provost, IU Communications, the PACE program and Department of Political Science are working to get students involved.