​Your guide to campus art

“Birth of Venus” was built by Robert Laurent, a former sculpture professor at IU who died in 1970. Laurent created the work in Rome, and it was transported to the United States. Herman B Wells, who was president of IU at the time, wanted a central fountain to add beauty to the campus. At the time it was gifted to IU by Grace Showalter — in memory of her husband, Ralph — the Fine Arts Plaza was still being developed. Curator of campus art Sherry Rouse said its celebrity comes from it being “the first big piece of art on campus.”

Translated as “Truth, daughter of time,” this sculpture was carved into the limestone of Ballantine Hall in 1959, Rouse said. Robert Laurent, who also created “Birth of Venus,” was the artist.

“The Space Between Adam and Eve”

The artist, Jean-Paul Darriau, was a much-loved sculpture professor at IU, Rouse said. He built “The Space Between Adam and Eve” in 1966. Both pieces are cast in bronze.

This well-known piece of art was created specifically to grace the lawn in front of the Musical Arts Center in 1971. Its sculptor, Alexander Calder, made the steel stable soon beforehis death — it was the last one he created, Rouse said.

IU purchased “Indiana Arc,” built by Charles O. Perry in 1995, in honor of former-IU President Tom Ehrlich and his wife, Ellen. It is a minimal surface geometric form. Since its placement, Rouse said, the Art Museum has adopted the piece as its symbol.

In 2007, with the Art Museum’s 25th anniversary coming up, IU was in need of something creative to celebrate, Rouse said. I.M. Pei, who designed the museum, suggested the building itself be turned into a canvas, Rouse said. Robert Shakespeare, professor emeritus of lighting design, built “Light Totem” as a temporary display. However, it was so well-loved that the University kept it as a permanent installation.

Amy Brier’s limestone sculpture, built in 2013, commemorated the 125th anniversary of IU’s Department of Psychological and Brain Sciences. At 7 feet tall, it is the largest anatomically correct brain sculpture in the world, Rouse said. The work was updated in 2015 when funds were donated for lighting design professor emeritus Robert Shakespeare to add coordinated lighting and music to the brain. The brain combined with the lights and music is titled “Consciousness.”

Don Gummer designed both of these steel structures, Rouse said — “Cindy’s Song” with the addition of a stained glass heart. Gummer, who is married to famous actress and honorary IU alumna Meryl Streep, was asked by President Michael McRobbie to create something to honor former IU President Myles Brand, who died in 2009. “Basic Action” was the result. “Cindy’s Song” was gifted to the University in 2015 by William Simon in dedication to his wife, Cynthia, for their 20th anniversary.

Welcome from the Provost 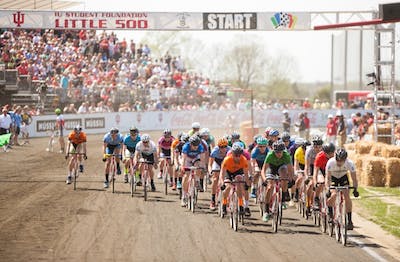 The Little 500 race celebrates its' 66th running this year. 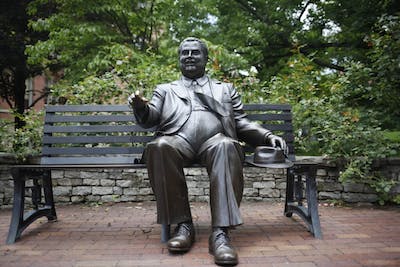 The Lasting Legacy of Herman B Wells

Herman B Wells brought great change to the IU campus during his presidency.