Sitting in the Bishop, eating pizza and drinking beer, guests of Local First Bloomington’s third annual PowerPoint Roulette fundraiser were taught about things like Chevy trucks, The Call of the Wild and hairy eared dwarf lemurs.

The presenters, everyone from Mayor John Hamilton to local business owners to Elvis Presley (more on that later), didn’t know much about these topics. In fact, they didn’t know what their own topic was until it flashed behind them onstage.

Each speaker was representing a local nonprofit. The funnier each person’s presentation was, the more tempted the audience would be to put money in that speaker’s bucket. At the end of the night, all of the donations went to the charity of the person with the most money in their bucket.

Local First Bloomington is a nonprofit dedicated to promoting local businesses in town.

“This is one of our signature events and it’s great because it’s about getting all kinds of people together,” said Jenny Mack, the group’s membership liaison. “There are lots of business owners here, so it’s really nice for people to be able to get to know each other and connect a face with a place.”

Not only did people connect, but they learned some very interesting, if inaccurate, lessons.

On Tupperware: “Earl Tupper was the first man not to finish a meal,” said Tony Brewer, presenter for Volunteers in Tutoring Adult Learning. “His wife went bankrupt because Earl kept wasting all their food. So that’s how that got invented.”

On Dodge trucks: “Dodge trucks are shit but they’re so right for everything,” Mike McAfee explained while raising money for the Cystic Fibrosis Foundation.

On the best way to give a presentation: “Man, I feel like students never pay attention. It would be awesome if we could just teach students shirtless and then they’d pay attention,” said Kelley School of Business lecturer Justin Ford as he shed his shirt to promote Bloomington PRIDE.

His presentation went on to emphasize the importance of visual aids.

On 2016 Chevy Silverados: “I own a Chevy so I’m gonna talk about my big dick and my big truck,” Back Door owner Nicci Boroski said while campaigning for Pages to Prisoners. “2016 is not a date, it is a measurement, if you know what I mean, and I think you do.”

The evening concluded with a presentation from a surprise guest, Elvis Presley. Presley was in full sequined Elvis attire, filling in for defending champion Brad Wilhelm in an effort to raise money for Rhino’s All Ages Club.

He taught the audience about Justin Bieber.

“This poor boy grew up in Canada,” he said. “Canada is a place that is not America. I don’t think Canada even has peanut butter sandwiches.”

The winner for the night was Abbey Stemler, who raised a total of $595 for Mother Hubbard’s Cupboard by predicting that the next Supreme Court Justice would be French physicist Charles-Augustin de Coulomb, who died in 1806. 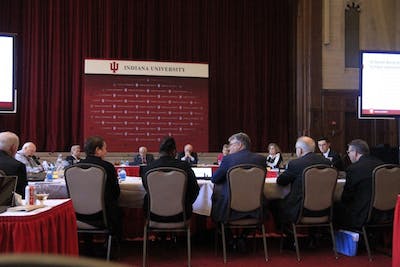 Election for IU Trustee Board postponed until June 2021

Trustee Pat Shoulders will serve an extra year on the board. 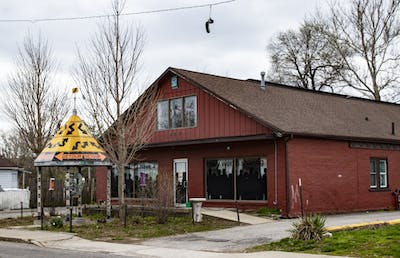 Everyone who enters Shalom Community Center facilities is screened for COVID-19.