Riding away: A day with Phi Psi

On one of the final training days for the Little 500, IDS reporter Brian Buckey observed Phi Kappa Psi on a ride

It’s Sunday morning and the Phi Kappa Psi Little 500 team is gathered near the bike room in its fraternity house.

Fresh off a second-place finish in Team Pursuit the night before, the team is pulling out its uniforms and preparing for a light ride through town. Some members are just coming back from church, while others look like they just woke up.

Today, they will ride what is called the Sample route, roughly a 20-mile ride through the north end of Bloomington.

“Today is kind of a recovery,” junior rider Dan Brown said. “We’re not going to be doing any big, hard outbursts. We’re just letting our bodies rest and repair after the all the months of training we’ve put in.”

Today’s 20-mile ride is light compared to the higher-intensity 40-50 mile routes the team takes in the months preceding the Little 500 season.

“Preseason we do longer rides to build muscle and lung capacity, and then when the track opens it’s more bursts to simulate the race conditions,” Brown said.

Phi Kappa Psi alumni coach Jim Kaese, who lives in San Diego, sends the riders interval workouts to follow throughout the year. The riders typically go for rides six days a week, taking Sundays off. The long distance between them and their coach, however, makes it the riders’ responsibility to keep up with the training.

“You can have a coach give you stuff to do and still not have people who actually do it,” senior David Schweer said. “Especially since our coach isn’t here, there’s nobody watching us. Either we do it or we don’t do it. You have to have a program that is willing to make the sacrifices.”

The team credits Kaese, whom they call a “master of training and nutrition,” with the recent success of the fraternity. Phi Kappa Psi, a seven-time Little 500 champion, is a traditional powerhouse, but as recently as 2003, the team qualified in 33rd place.

In the team’s bike room, small white cut-outs with black numbers progress in a line near the ceiling of the room. Each cut-out marks the team’s qualifying position that year. Starting in 2002, the numbers go 22, 33, 7, 1, 2, 1. This year, the team qualified third.

“That’s kind of like where we used to be and where we are now,” senior Mike Segal said.
With the race less than a week away, this ride will be one of the last the team takes before the race. The team will train on the track during the week leading up to the race.

The Sample route is mostly back roads, and it reaches as far as 10 miles north of campus, with a nice mix of hills, curves and straight-aways. The Phi Kappa Psi riders are on road bikes today, which they say are a bit more comfortable than the standard Little 500 bikes.

They stay together in a pack for most of the ride, but narrow into a straight line on several occasions.

As the sun beats down on the riders in the middle of one of the back roads, they unzip their uniform jackets. They pedal down the road while their green and white jackets rush back and forth in the wind.

It is the perfect day for a light ride. 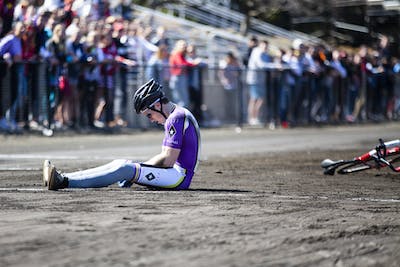