Ron Smith gives a speech to Democratic supporters Tuesday night after he was declared the unofficial winner for the Bloomington City Council District 3 seat at the Monroe County Democrats watch party. Smith won with 448 votes.

Sue Sgambelluri speaks about her victory Tuesday night in the city council District 2 election at the Monroe County Democrats watch party. Sgambelluri was the only one to face a republican candidate.

Two women were hit by a car Tuesday evening. They were taken to the hospital with injuries that are not life-threatening, police said.

A CrimeWatch sign stands on Tuxedo Street in Indianapolis a few blocks down from where a 21-year-old man was shot Monday. Seven people died from weekend gun violence in Indianapolis.

Junior Ian McIntire sits in his parents' home in Indianapolis on Nov. 30. McIntire is on medical leave for fracturing his skull and suffering from brain trauma after crashing a Bird scooter.

A deer crouches low in the brush near a house in downtown Bloomington. White-tailed deer have overpopulated the Griffy Lake Nature Preserve for years, damaging forest ecology by feeding on plants.

A student protester raises a sign above the crowd Saturday at the March for Our Lives rally in Washington, D.C. Bloomington high schoolers traveled 13 hours to the nation's capital to advocate for gun reform.

Seniors George Morpurgo and Caleb Poer from Bloomington High School North sleep on the bus on the way to Washington, D.C. for the March for Our Lives. Students left at 7 a.m. Friday and arrived in Springfield, Virginia, 13 hours later.

Senior Caleb Poer from Bloomington High School North talks to other Bloomington students as they get off the Metro and head toward the National Mall for the march. Poer was one of the main students who helped organize the trip to D.C., giving interviews and fundraising to help his classmates get to the protest.

Rodger Bowler holds up a sign in support for younger generations and gun control. Bowler traveled from Massachusetts for the March for Our Lives.

Siblings Connor Smith and Reilly Smith, a senior and a freshman at Bloomington High School North, hold their signs on the Metro on Saturday morning on their way to the March for Our Lives Rally. Reilly Smith also wore a shirt with the same slogan as her sign.

Bloomington High School South freshman Marleyla Wiltz holds up a protest sign at the March for Our Lives rally Saturday in Washington, D.C. Wiltz was one of 46 students who traveled 13 hours from Bloomington to stand against gun violence in the United States.

Senior Bloomington students finalize poster ideas in their Comfort Inn hotel room the night before the march. Many students carried signs that referenced the NRA and featured pop culture memes. 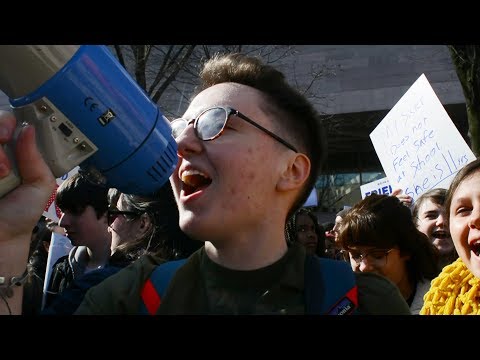 Students from Bloomington high schools traveled Friday to the March for Our Lives rally in Washington, D.C. To stay energized on the long bus ride, they took naps, played "Never Have I Ever" and talked about everything from Pokémon to politics.

Bloomington students raised about $15,000 for their trip to the Washington, D.C. March for Our Lives rally. Students were each asked to pay $23 of the cost, $3 of which went to black T-shirts with red lettering displaying their group name.