Features
Your local guide to the 2022 midterm elections
The Red Zone: Coverage of sexual assaults reported at IU
Everything to know about the IU graduate worker strike
news administration student life

Around 200 undergraduates, graduate students, faculty members and community supporters attended a rally outside of Ballantine Hall at noon Thursday. Undergraduate students were encouraged to walk out of their classes at noon, but many classes were canceled, and students who didn’t have class attended the rally.

The goal of the undergraduate walkout was to promote solidarity between the two groups of students. The university has argued that the strike could harm undergraduates and result in a loss of financial aid if grades are not completed by graduate workers. In an email Wednesday, IU provided undergraduates with a form to report striking workers.

One undergraduate student carried a sign that read “Pell grant recipients for graduate workers,” referencing the university’s claim that the graduate workers’ strike could cost some students their Pell grants. Pell grants are federal grants awarded to students with “exceptional financial need.”

At the start of the walkout, organizers encouraged undergraduates to text their friends who were still in class to walk out. A series of speakers made the case for a union and led chants.

Graduate workers spoke about the material benefits of unionization, arguing that a higher income will allow them to be better instructors because they will have more time and energy to focus on their obligations as students and instructors rather than additional jobs. Undergraduates, including two representatives of IU Students for a New Green World, spoke about why they support the unionization efforts.

Bradi Heaberlin, a graduate student worker, said graduate students have tried everything short of a strike in recent years, from sending letters to the provost to refusing to pay mandatory fees, which only resulted in listening sessions in which unionization wasn’t on the table.

“It is the only option we have left,” Heaberlin said.

Ben May, a junior who is the speaker of the IU Student Government Congress, attended the rally. IUSG endorsed the strike, and he and other members of IUSG were there to show support.

“I know the importance of somebody fighting for you,” May said.

Linda Garcia, a graduate student from the history department in attendance, said the students in their classes were supportive. The history department is neutral, but some faculty members such as Jeffrey Gould and Micol Seigel have been vocally supportive. They said the university’s announcements about Pell grants and the form allowing undergraduates to report graduate workers have been an attempt to make it seem like graduate workers don’t care about their students, but they do.

“It’s nice to see that despite the university’s tactics, undergraduates are still supporting us,” Garcia said.

At 12:45 p.m., some undergraduate students who had not walked out of class left Ballantine when their classes ended and walked past the rallying students and their supporters, some of them cutting through the rally. Ballantine was mostly empty by that time.

Faculty members spoke, too. Ross Gay, a professor of English and a poet, read one of his poems.

Nicolas Valazza, a faculty member in the French department, said he was there in solidarity. His undergraduate classes are ongoing, but he said he supports the unionization efforts and graduate students are fundamental to undergraduate language courses.

Amrita Chakrabarti Myers, a professor of history and gender studies, said she supported the strike in part because of her own experience of debt and poverty as a graduate student.

“No one else should have to do what I did,” she said through the megaphone.

CORRECTION: A previous version of this article used incorrect pronouns for Linda Garcia. 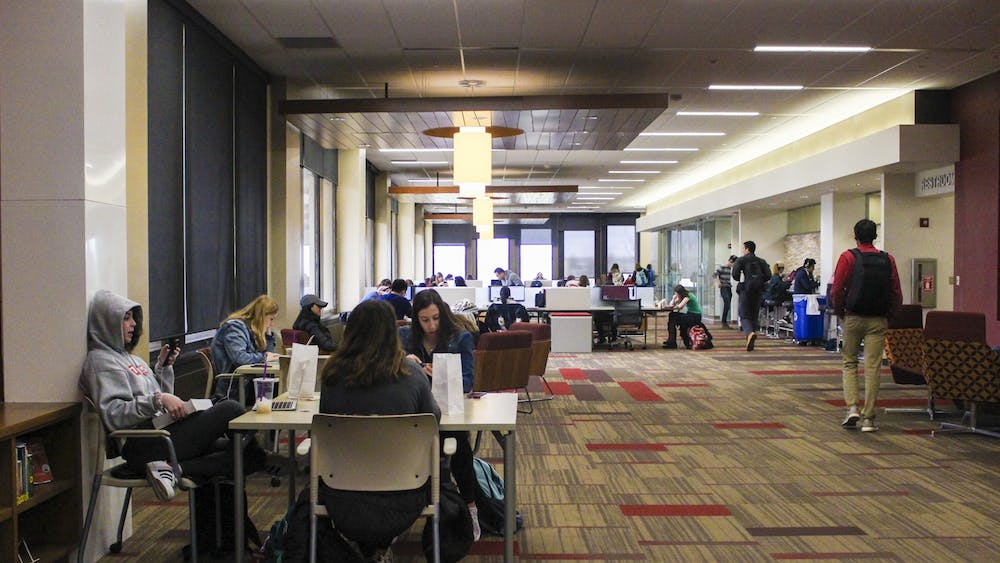