COLUMN: 'Opportunity' Costs: the expense of being a student-employee is worth it

“Sorry, I can’t. I have to work.” As a student employee, that phrase has become my default response to nearly any and all plan-making attempts over the past three and a half years.

From group projects to career fairs to just hanging out with friends, “Sorry, I can’t. I have to work” has kept me from doing several of the things I would have liked to do throughout my academic career. Now, as a senior about to enter the job market, I can’t help but reflect back on the opportunity costs of being a student-employee — and find that it has all been worth it.

Since my freshman year, I, like many others have worked at least one part-time job while being a full-time student. As of 2013, approximately 80 percent of college students work an average of 19 hours a week while working toward their degrees. And with tuition and living expenses both consistently on the rise, this isn’t expected to change anytime soon.

Yet, while more and more college students are choosing to work while attending school, the average debt of college students continues to increase. Student debt in the United States reached a new milestone earlier this year when it surpassed $1.5 trillion, with the average college graduate owing around $37,000. That’s an increase of more than $900 billion in just the past 10 years.

With tuition and living expenses continuing to rise, students are faced with the choice between taking out loans and prioritizing their education, or, working a greater number of hours and reducing their time focused on schoolwork. I, for one, chose the latter option.

Despite the challenges that being a student-employee inevitably poses, I’m more than glad that I chose to work through college. Not only does working through school reduce potential debt and establish job experience, but student-employees typically have higher grade-point averages, too. On average, students who work part-time jobs have an average GPA of 3.13, whereas unemployed students’ GPAs averaged only 3.04.

Being a student-employee isn’t easy by any measure. Over the past three and a half years, I’ve worked an average of 25 hours a week which adds up to 4,500 hours in total. That’s 4,500 hours that I could have spent studying for classes, participating in more student organizations or attending more on-campus events. Instead, I spent thousands of hours working to pay for my education — and I think that was time well spent.

Working while earning a degree is certainly difficult, but it isn’t impossible. It’s important for students to be invested in their own education, and working to cover educational expenses is one way of accomplishing that. Attending college is not a right, and students aren’t entitled to be on campus just because they want to be. Students deserve to work their way through school so that they understand the value of the degrees they’re working toward.

As a student employee, I have undoubtedly missed a variety of academic opportunities because of my jobs. However, I don’t view this as a loss. Working through school has taught me to develop critical, professional skills that I couldn’t have learned in a classroom.

Being a student-employee does have an opportunity cost, but I think that cost is well worth the expense. I know that when I graduate, I’ll appreciate the value of my degree all the more for having earned every ounce of it. 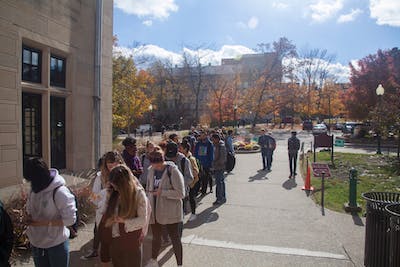 OPINION: Stop freaking out about Kayne West ‘running for president’

The rapper shows no sign that he plans to run a real presidential campaign.

OPINION: More questions than answers should be cause for caution this fall

Classes start in six weeks, but there are still too many unanswered questions.