State legislation could cause jail overcrowding in Monroe

A House bill making its way through the Indiana legislature could squeeze already limited space for inmates in the Monroe County Jail.

House Bill 1006 would funnel state dollars to county corrections programs and make it more difficult for circuit courts to send felons to prison. On April 14 the Indiana Senate unanimously approved the bill, which would allow for $80 million in local programs including mental health and addiction services for low-level offenders. The legislative session ends Wednesday.

The bill is the latest in a series of state legislation shifting responsibilities from state prisons to county jails. It would provide funding in response to changes to the state ?criminal code, which could lead to more inmates in jail rather than prison. According to these new rules, as of June 2015, no one convicted of a level 6 felony can be sent to prison if his or her sentence is for less than a year.

“I think they are really going to feel the squeeze,” Wilson said.

Data collected by the Indiana Daily Student shows that each year during the past five years the jail has faced a growing number of days with higher populations. 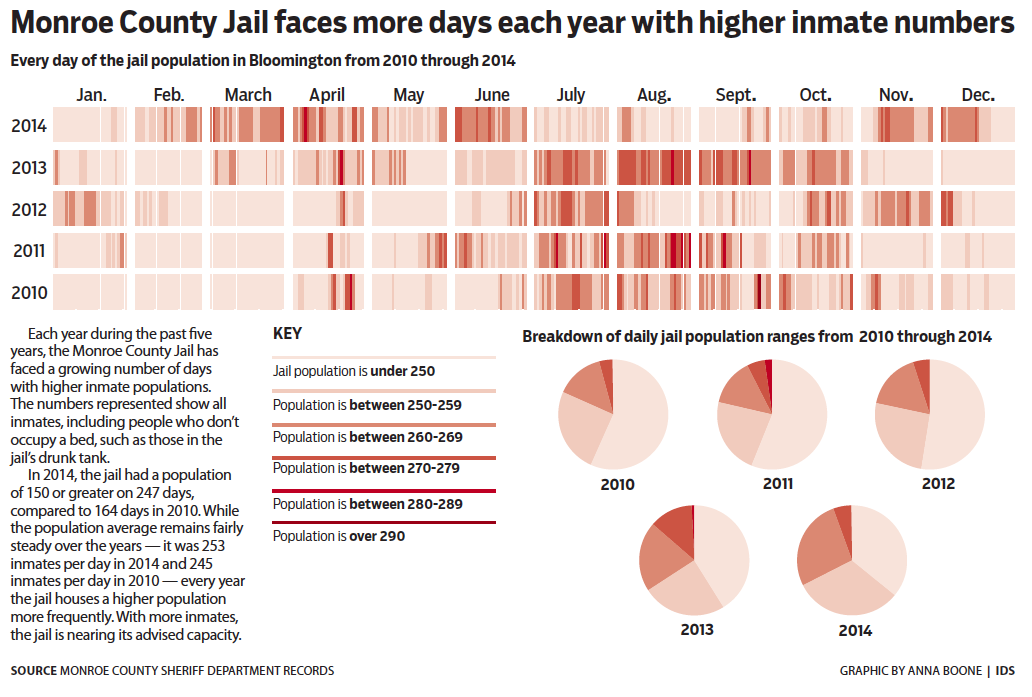 Jail overcrowding in Monroe County has been a constant since a class-action lawsuit on overpopulation was filed against the sheriff’s office in 2008.

At the height of this legal scrutiny, inmates were sleeping on the jail’s gymnasium floor.

Trevor Richardson, who had been confined in the jail for six months, got the American Civil Liberties Union of Indiana to take his case. In the original filing, Richardson complained conditions in the jail were “inhumane, unsanitary, dangerous and harsh.”

Overcrowding was causing serious sanitation and security issues, according to court documents.

The ACLU and the Monroe County Sheriff came to an agreement intended to ensure the jail population does not exceed its number of beds. The settlement has been routinely renewed, most recently in ?October 2014.

There are 248 general population beds in the jail, but inmates in certain areas, such as the drunk tank, are not included. The average population was recorded as 253 in 2014, but not every inmate recorded would have occupied a bed.

The agreement states when the jail reaches 244 inmates occupying beds, it must contact the circuit court judges, who are then tasked with releasing certain inmates. They must determine which inmates pose the smallest threat to the community in order to free up space.

Population levels have been nearing this limit since the agreement, and community members wonder if changes to the criminal code could bring inmate numbers over the edge.

Even now, Rick Naftzger said he thinks overcrowding in the jail is severe. Naftzger has been in the jail for short stays on and off since 2006, and his most recent stay was for a few weeks in late 2014. He said there were probably 13 inmates sleeping on cots on the cell block floor.

“It’s always been overcrowded for as long as I can remember,” Naftzger said.

County authorities have done what they can to address the issue, but resources are limited, Todd said. He said he thinks overcrowding will create fundamental problems with the entire ?correctional system.

“It’s a constant struggle for us to monitor the jail population,” Todd said. “It becomes more and more difficult as time goes on.“

Wilson said the Sheriff’s Association found through recent surveys that ?populations in Indiana’s big and small jails have been decreasing. For reasons Wilson said he could not explain, the survey found medium-sized jails in Indiana, like the Monroe County Jail, are the ones seeing population increases.

The jail has some capability to reorganize its inmates to reduce the pressures of overcrowding. In some cell blocks, there are extra mattresses in plastic tubs, called Stack-A-Bunks, that meet state standards.

James Roberts was an inmate in Monroe County Jail from February 2014 to February 2015. Roberts always had his own bed in a cell, but he said overcrowding was a constant problem.

“Usually they have a little bunk for you where you can lay on the floor,” ?Roberts said.

Because inmates are exposed sleeping on the floor, Roberts said they often get kicked in the head, or their belongings are stolen while they were asleep or away.

The money provided by HB 1006 aims to make up for increased pressure on the jails, but Todd said he wouldn’t commit to spending a dollar of state money until he saw it.

“The money that turns up is a fraction of what we need,” Todd said.

The alternative is to keep lower-level offenders out of the jail. However, the county is getting to the point where it has no place to put its offenders, Todd said.

People are starting to realize this, which makes it more difficult for Todd to enforce his decisions in court.

“We’re getting people in court now saying, ‘I don’t know why you’re arresting me, you can’t put me in jail,’” Todd said.

Todd said there is not a clear path to fixing the problem of overcrowding. No one is motivated to build a new jail, he said, but some members of the community have been advocating for a minimum-security community corrections center for years. He envisions a facility separate from the jail, designed to deal with lower-level ?offenders.

The resources are still lacking, and Todd thinks there is not enough community awareness to support such a project.

“The bricks and mortar aren’t the issue,” Todd said. “The issue is the county’s ability to fund the operational expense of such a facility.”

Without any new facilities or means of dealing with lower-level offenders, Todd said he expects the problem of jail overcrowding will only get worse in the ?coming years.

“It’s going to get to be a more and more significant problem,” Todd said. “Eventually it’s going to have to be addressed in some way.”