Whether these tracks destroy the last shreds of faith you had in love or reassure your belief that true kinds live through the storm, there’s no denying that Beyoncé Knowles Carter has juiced as much talent and passion as possible out of a shitty situation to make her new album, “Lemonade.”

How to put on a condom

Aran Mordoh, a sexual health education coordinator, teaches participants how to put on a condom.

A grin sneaked across Tom Williams’ lips as they scrolled through their phone, looking for a picture of the first time they ever wore a dress. According to Williams, it was one of the happiest moments of their life.

G-Eazy's sophomore album is a masterpiece

If anything, this album tells us Gerald Gillum has no plans to live modestly and overlooked.

At 5:10 p.m., a gunman with a mini-14 rifle in hand and a hunting knife on his person entered a classroom at École Polytechnique in Montréal that was occupied by about 60 engineering students.

“Freedom, I’dom, me’dom. Where’s your we’dom?” sings M.I.A. in front of a backdrop of running refugees.

COLUMN: Listen to your body when you're in pain

It’s not everyday your doctor tells you that your body has failed you.

The man in the hyped castle

It’s 1962 in North America. Families work hard for their country, children dutifully go to school and Nazis control a majority of the old Land of the Free.

You're gonna love these songs

Sara Bareilles has done it again — she’s made us fall in love with her.

Just as the world is saying “Hello” to Adele after her four-year hiatus, we are finally saying goodbye to the late Amy Winehouse.

Del Toro returns for the beautiful yet bland 'Crimson Peak'

At the heart of the Crimson Peak mansion is a gaping hole in the ceiling. Leaves and snow drift precariously through the hole, past the winding staircase and land into a heap on a sinking wooden floor. What perfect symbolism to describe the missing parts of the film “Crimson Peak.”

COLUMN: Contemplating trends in my activewear

It’s so common, you wonder if you’re having déjà vu or even a brain aneurysm: A stereotypical college girl complains loudly in public about how she never works out, all while holding a Starbucks coffee, donning a designer bag on her arm and sporting a Lululemoon yoga outfit.

COLUMN: Stop using rape as a trope in horror films

In the horror film genre, there are many complaints I can make about the stereotypes used: killing people of color early, the lone virginal survivor, every character’s undying interest to check the strange noise coming from the basement/woods/under the bed.

COLUMN: Leave the comfort zone and launch yourself into new experiences

If I could only remember one thing I learned from college, it would be to get out of my comfort zone.

I’ve officially started a zero tolerance policy when it comes to musicians who are problematic.

Out in the Open, Episode 1: Freedom of student journalism

Out in the Open features discussions and debates on hot topics and pressing issues in current events. The show is hosted by the Opinion editor, Madison Hogan, and stars columnists from the newspaper's Editorial Board. Columnists featured in this episode are Tristan Fitzpatrick and Matthew Cinkoske. Produced by Leah Johnson.

COLUMN: Peering through heart-shaped glasses — a critique of "Lolita" covers

“Don’t judge a book by it’s cover,” never meant as much as it does for Vladimir  Nabokov’s “Lolita.” 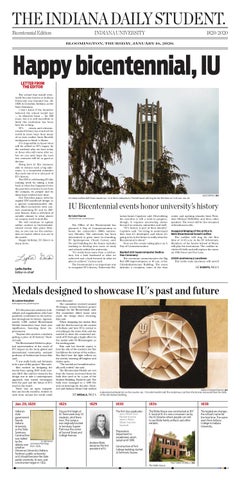