The Jacobs School of Music student-run organization Classical Connections brought a music workshop to Brown County High School this past weekend. The group works to share music and the arts with the community.

A group of people clad in yellow, red and black robes smile and clap as they enthusiastically sing the lyrics, “Open your mouth, say something.”

Scenes from everyday student life, such as studying and taking lecture notes, are interrupted by the relaxed movements of ballet dancers. These scenes are from the film “Shift,” which will be screened at 7 p.m. Saturday at IU’s annual student film festival, “Montage: A Celebration of Moving Pictures,” at the IU Cinema.

If junior Keshav Muralitharan could sum up Holi in one word, he said he would describe the annual Hindu festival as colorful.

Italian film writer and director Wilma Labate will speak at the IU Cinema starting Wednesday, accompanying screenings of her films.

Wii remotes and other game controllers will become instruments at the Computer Music Recital on at 8 p.m. Sunday in Auer Hall.

Former star of “The Bachelor” and IU alumnus Ben Higgins was back in Bloomington to support an Indiana University Dance Marathon fundraiser Wednesday at local restaurant Campus Craves.

Rock duo Remo Drive will be performing at 8:30 p.m. Saturday at the Bishop Bar. The group will play after opening acts from local artists Matt Tobey and Inkwell Moon.

IU students will perform music from Disney movies and award-winning films at the free “Guitar Ensemble Plays the Movies” concert at 8 p.m. Saturday in Auer Hall.

'MASS' to be performed at the Musical Arts Center

A group of children buzz on kazoos as a marching band clad in circus-like outfits stomps around them.

Soft voices slowly begin singing the word “dream,” accompanied by light humming from the lower voices. A woman’s voice then cuts through the sound.

A soft violin and flute duet begins as the purple curtain lifts, revealing four male dancers jumping onto the stage. Their feet barely leave the ground. As they dance, a couple joins them, swaying and striding across the stage with the girl’s white skirt flowing around her.

A potion that can make someone young forever, a remedy to get rid of bed bugs and a magic concoction that can make a person irresistible. These are just some of the many capabilities of the elixirs created by Dr. Dulcamara in the upcoming Musical Arts Center production, “The Elixir of Love.” 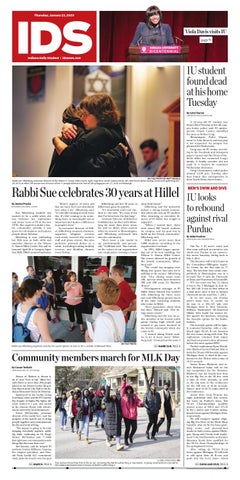